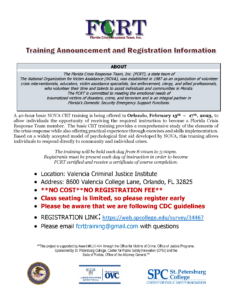 FCRT’s 40 hour training focuses on fundamentals of crisis intervention tovictims of trauma. Since 1987, FCRT has sent teams to hundreds of small-scale critical incidents as well as mass casualties. Upon request we have responded to mass shootings as in Parkland High School, train crashes, terrorist attack like the Pulse Night Club shooting, hurricanes and tornadoes within Florida. When requested by NOVA , we have sent Florida teams to national responses including the 9/11 attacks on the World Trade Center in New York and the recent Las Vegas concert mass shooting.

How Can We help?

How Can We help?